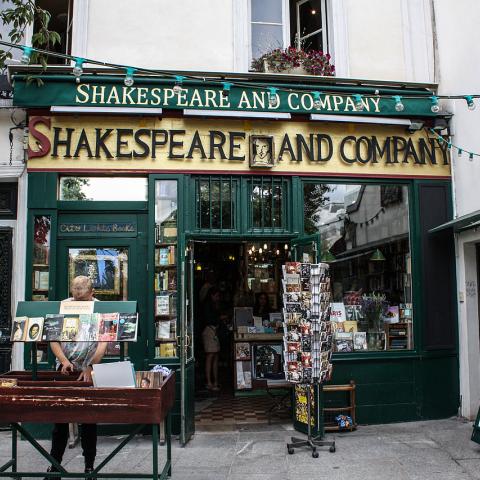 Among the great bookstores of the Latin Quarter, Shakespeare & Co is undoubtedly the best known throughout the world. This English language bookshop and library is a magnet and gathering place for expats and anglophone tourists in Paris and has become a real institution!

Shakespeare & Co; a way of life

Founded in the 20s, Shakespeare & Co saw the eminent members of the so-called Lost Generation come to live in Paris, bringing with them their genius and their malaise. Hemingway, the Fitzgeralds, Gertrude Stein and James Joyce, to name the most prominent of this cultural clique, considered it one of their favourite places in the capital. The bookstore was also known for distributing books banned in the United Kingdom. If this subversive side has since diminished, it remains a place that welcomes all kinds of people.

Of course, on the shelves of Shakespeare & Co you'll find the cream of littérature anglo-saxonne, from the timeless classics to contemporary works and cutting-edge writers. But this Parisian institution also hosts conferences, talks, signings and meetings between readers and authors. You can also take the time to enjoy five o'clock tea on the terrace with a slice of George's famous lemon pie, an irresistible creation of the bookshop’s founder. And to heighten your sense of anticipation prior to visiting Shakespeare & Co during your stay at the Hotel Les Bulles de Paris, take some time to browse the bookshop’s website. It's a real goldmine of engaging and informative blogs, podcasts, recommendations, upcoming events, news and more.

Before returning to the typically Parisian atmosphere of your Hotel Les Bulles de Paris, enjoy a deliciously British experience at the Shakespeare & Co bookstore and meet literary enthusiasts from around the world in this venerable and much-loved institution.