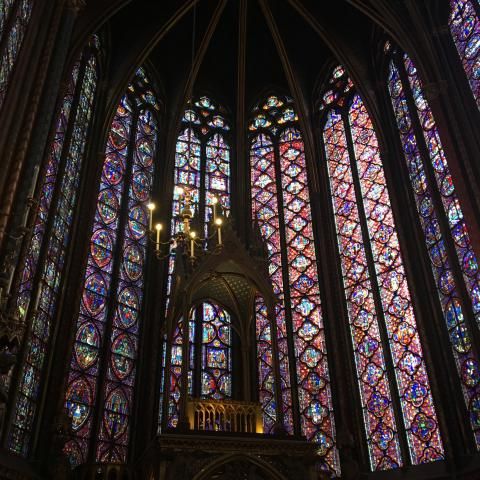 A short distance from your Hotel Les Bulles de Paris, on the Ile de la Cité, stands one of the most moving and magnificent monuments of Paris; the Sainte-Chapelle. Unusual in many respects, it arouses awe and wonder beyond its fascinating history. Read on as we tell you a little about this stunning royal chapel!

The Sainte-Chapelle; a succession of surprises

You can see its spire from afar, but the Sainte-Chapelle is discreetly tucked away amidst the imposing buildings of the Palais de Justice. Its construction was decreed by King Louis IX (commonly known as Saint Louis) to house the precious relics of Christ acquired throughout his reign. Remarkably, this superb example of the Rayonnant style of Gothic architecture, with its 1,113 stained-glass windows, was built in record time; this epic achievement took just 7 years to complete. Paintings, sculptures, stained glass; everything attests to the mastery of the artists of the period and tells the story of the Passion of the Christ.

The magic of the Sainte Chapelle

Even as we become fully aware of the technical and artistic prowess spread before our eyes, the Sainte Chapelle offers a further touch of magic to lift our hearts. This is undoubtedly due to the mise en scène, which takes you first through a dimly illuminated space with low ceilings and walls painted royal blue and dark red, covered with golden lilies. Encouraging meditation, this room allows visitors to prepare themselves for the dazzling array of colours and light that awaits them as they enter the nave. Whether considering the whole or looking at the details of a stained-glass window or an intricately crafted sculpture, the beautiful and the sublime are everywhere.

The Sainte Chapelle is one of the emblematic monuments of Paris. This 13th century masterpiece transcends religious and artistic differences to provide pure and intense emotion. As you can probably gather, we at the Bulles de Paris love it!