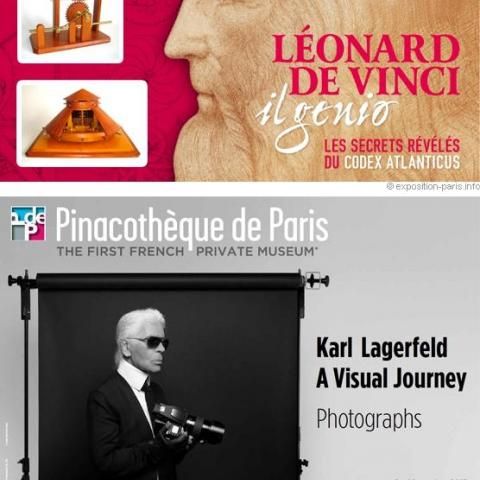 Leonardo and Karl Lagerfeld, face to face at the Pinacothèque

Published on Thursday, 26 november 2015 in Exhibitions and Culture

A chance pairing or a studied intention?  Still, these two exhibitions at the Pinacothèque, Paris – Leonardo da Vinci until January 31st, 2016 and Karl Lagerfeld until 20th March, 2016 have certain parallels and are sure to incite invigorating conversation and debate. Les Bulles de Paris highly recommends a visit to either or both of these outstanding retrospectives.

Two men, two different eras and two very distinct ways of approaching art as a key to understanding the ways of the world. Far be it from us to compare the timeless genius of Leonardo da Vinci, one of the multifaceted talents of his time, with Karl Lagerfeld, a designer who has somehow managed the feat of entering the museum during his lifetime. However, it is nice to see a certain similarity of approach in these two exceptional creators who see things with very different eyes but who both offer a seemingly endless source of inspiration.

It is through the Codex Atlanticus, that famous book which we assume never left the pocket of the Master, that we enter the secret mysteries of creation in the most fantastic way. These strange drawings, mysterious hieroglyphs and often barely sketched ideas baffled and caused despair in generations of Champollions who dreamed of uncovering the means to great discoveries within their cabalistic signs. But, it was always said that perseverance would eventually pay off and at the dawn of the twenty-first century we are rewarded - our eyes finally take in the wonder of the rise of those extravagant air and hydraulic powered machines once imagined by the great Florentine scholar.

Journey to the heart of creation

We invite you to continue this exciting journey at the Pinacothèque where the heart of science is finally freed from the attendant drama. Karl Lagerfeld awaits, in the pose he loves - hieratic and distant, with his black and white self-portrait under his arm. The “mise en abyme” is just the beginning. The designer is transformed into inspired voyeur, immortalizing the onlookers on the streets of Paris at night, his atmospheric landscapes and abstract lines offering a unique view of the contemporary world.  More exciting still are the new techniques used and unveiled here for the first time as technical research enables artists to turn daguerreotype into digital film or Polaroid. It’s a bit like the painters who revisit the art of the ancients with new techniques or colours. After all, is this not the way that the loop is tied, the circle completed?