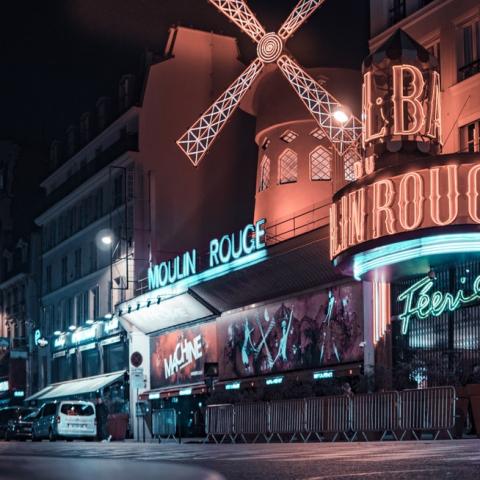 Among the must-sees of Paris we can count the bateaux-mouches, the Champs-Élysées, shopping in the city’s great department stores and ... an evening in a cabaret! As festive, fun-filled and enchanting as your Hotel Les Bulles de Paris, cabarets cultivate the timeless Parisian spirit and are at true artistic statement. Prepare for a memorable evening.

The leading Parisian cabarets continue to maintain the charismatic aura of magic and spectacle that makes these places so special. Colourful and bright, they offer a refined dinner with champagne, a stunning show, and wonderful music and dancing, including the famous French Cancan. Seductively charming all year long, these cabaret evenings take on a particularly distinctive flavour towards the end of the year, climaxing the season with festive packages for exceptional Christmas and New Year parties.

The top cabarets cultivate their own distinctive identities which, while respecting the codes of the cabaret, allow them to offer truly unique shows. The Moulin Rouge, behind its instantly recognisable facade, invites you to enjoy a magical revue in the great tradition of the late 19th century. At the Lido, the focus is on the play of light and the elegance of feathers and silhouettes. Finally, the Paradis Latin is famed for the diversity of its shows, in which the music and dancing is interspersed with performances by jugglers, magicians and acrobats. That said, in each of them you can happily pursue the ‘champagne’ theme you began in your hotel, the Bulles de Paris. The teams of the Hotel Les Bulles de Paris welcome you in the heart of the Latin Quarter, where restaurants, cafes and musical venues abound. But for a festive evening in the great Parisian tradition, with the French Cancan and champagne, nothing beats the cabaret! We’ll happily advise you which cabaret you are most likely to enjoy.