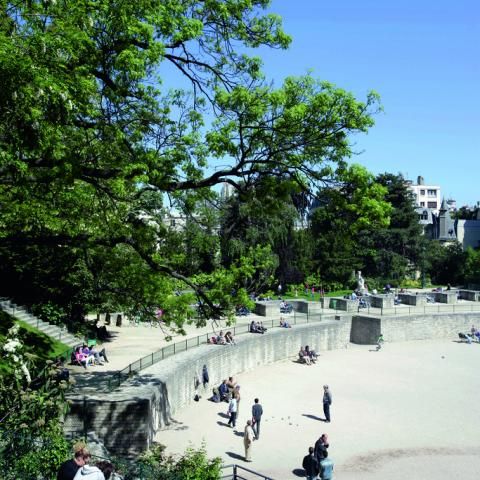 The Paris of Antiquity; the Arènes de Lutèce and the Thermes de Cluny

Medieval Paris is well represented by Notre-Dame Cathedral, and the Renaissance and the Enlightenment by the Louvre, the Place des Vosges and the mansions of the Marais, so we tend to forget that the city is much older. Discover the Arènes de Lutèce and the Thermes de Cluny, the only visible remains of the classical era in Paris, near your Hotel Les Bulles de Paris.

The Arènes de Lutèce; a Roman amphitheatre in the heart of the 5th arrondissement

There’s no need to queue or get a ticket as admission to the Arènes de Lutèce is free and you can wander around the place at will. Dating from the first century A.D., this is an extraordinarily well-preserved Gallo-Roman amphitheatre. From the terraced seating to the rooms beneath the lower terraces and the raised stage with its statue niches, it’s easy to summon up a powerful impression of the distant past. This remarkable venue once seated some 15,000 spectators. Panels placed around the site provide further information.

The Thermes de Cluny; a link between Antiquity and the Middle Ages

The Thermes de Cluny are the remains of a Gallo-Roman thermal bath complex built between the first and second centuries A.D. that originally extended over several hectares. Now a part of the Cluny National Museum of the Middle Ages, which houses the famous Lady and the Unicorn series of tapestries, the bathhouse retains an impressive number of its original architectural elements. You will discover the various rooms and their uses, including the caldarium, frigidarium, tepidarium and gymnasium, and see preserved fragments of the building’s original wall paintings and mosaics.

Take a trip back in time by visiting the last vestiges of ancient Lutetia. In the heart of the Latin Quarter, a few streets from the Sorbonne, the Jardin des Plantes and your Hotel Les Bulles de Paris, the Arènes de Lutèce and the Thermes de Cluny invite you to discover a little-known era in the history of Paris.